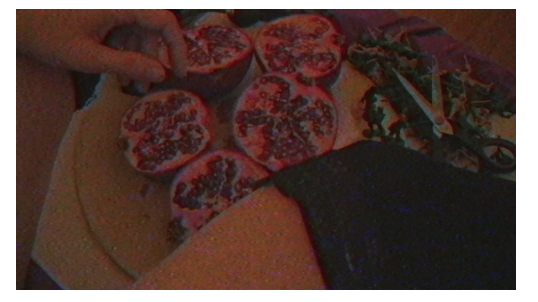 It’s that crazy time again, where I contribute to a new film by the fearless Rouzbeh Rashidi – Trailers.

All I can say right now about what I did for this one is that it is about an emotional “imbalance” (in quotes because I am a woman) related to feminine sexuality. It was very messy to film, and perhaps a bit cathartic.

It’s interesting how my artistic relationship is developing with Rouzbeh. While I am responsible for my own interpretation of the thoughts he communicates to me about a particular film, and I only film myself (as usual), my ultimate contribution to his films is, in essence, as an actress. This is not a role I have taken on for anyone else in my short history of working in this medium. But I like the way that Rouzbeh allows me to contribute, although he is free to do what he likes with what I give him after that. As well, when I film for him, I have an opportunity to separate myself from my own work, and do things that I probably would not otherwise do – because I play a role, and not myself. It’s a chance to get out of my own head for a while, participate with a group of other actors and a director in building an idea, which actually comes as a relief because it takes me away, for a time, from the intense ruminations I entangle myself in when I make my own work.

I’m grateful for this vacation from me.