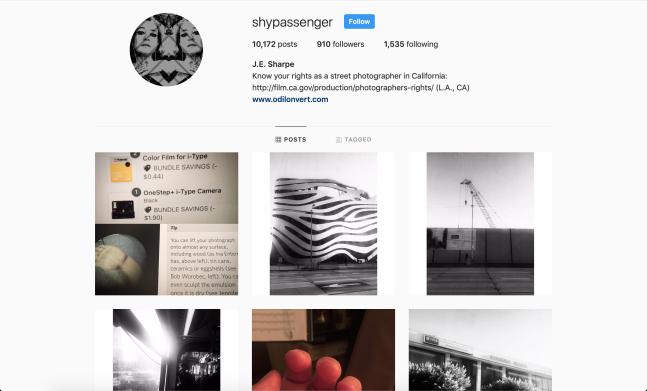 So… for now (as in, there doesn’t seem to be anything else out there that everyone’s flocked to… yet), it appears that Instagram is the only social media sharing platform of choice that I can tolerate. This is where you’ll find daily news of my art adventures – I save the milestones for this, my website. Sometimes I also veer off track there, in brief, to other things that in the past I tended to spend more time online expressing myself about – but am really loathe to do anymore.

No, really. I’ve had my problems with social media in the past, including a period of time here where I was off the biggest one of all, Facebook, for over a year, and writing/making art about the whole privacy/exploitation thing. But now, I’ve realized that more than anything, I can’t deal with constant, 24/7 self-expression nor witnessing that with others I know. I’m more at peace connected, but barely so to that never sleeps medium. That’s just my deal. I need to re-charge. I’m in and out. I don’t have a ton of social energy. And I’m DEFINITELY not a self-promoter. Which is another reason I continue to be leery of doing ANY more competitions, festivals, etc., even though I was very surprised and grateful about being picked for this one recently. Anyway, my work is just too hard to define, so what’s the point – I don’t find disappointment or isolation motivating in the least. Better to stay away and be happy in my own way. I have a job for money.

Anyway, doing photography while commuting almost every day. Lately doing moody b&w, seeing LA from a lonely, alien, inhospitable urban point of view (it’s underneath the sunshine). Shooting from a quickly moving bus, while on the subway, sometimes when on the street. But mostly while in motion from one destination to another, documenting the same route in different ways, over and over, since 2016, when I decided I wanted to do street photography more seriously.

Yeah, I have over 10,000 images on Instagram from that time to this day. And I’ve made many artistic friendships all over the world, seen many styles of street photography and many places I will probably never physically visit, through the eyes of other artists. I enjoy meeting lots of artists this way, engaging in shop talk, and supporting each other virtually. This is my art community outside of LACDA. It’s awesome.

The other thing I’ve done this summer is started learning acoustic guitar. I bought a Baby Taylor BT1e, which means I can plug it in if I want to one day. The sound is beautiful. I’m developing calluses on my fret hand fingers. Practicing arpeggios, familiarizing myself with the chromatic scale on 6 strings, soon I will get to learn chords. Teaching myself from a book on classical acoustic guitar (Frederick Noad’s), though on steel strings. Steel strings because my inspiration to learn guitar was getting deeply into the music of Elliott Smith. And I want to learn some of his songs for solo guitar. And to perhaps make a film series inspired by them.

And of course, I would like to use my guitar, among other things, to make my own music for my films, more so than I have done in the past with piano, apps, ambient sound, and my own voice. My dreams are BIG. I’m expanding my knowledge to take advantage of both my art AND music background. Must.

So, that’s the deal-io with me, on the eve of September 1.